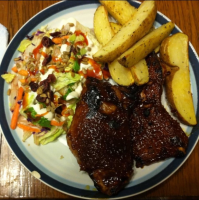 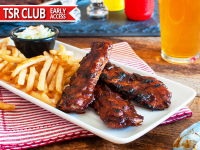 Ever wonder where Riblets come from?"Riblets" is Applebee’s trademarked name for button ribs or rib tips (as they are called at Walmart), which is a short cut trimmed from the back end of pork spareribs, packed with lots of connective tissue. And that's a good thing because, after 3 to 4 hours of braising, that connective tissue will break down, producing fork-tender meat that slips off the bone. Of the cooking methods I tried for my version of Applebee's Riblets recipe, which included steaming, slow-roasting, and smoking; braising made the most tender, flavorful ribs—even before the sauce went on. For the braising formula, I found that chicken broth infused with liquid smoke creates tender ribs that taste as if they came out of a smoker. Finish off the braised ribs on your grill and baste them with the original TSR hack below that clones Applebee’s honey barbecue sauce, or use your favorite bottled sauce. And if you'd like to serve these riblets with almond rice pilaf as they do in the restaurant, you can find my clone recipe here on the site.